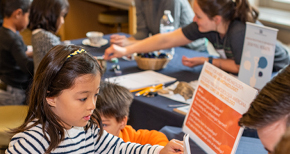 Because of archaeology's special educational value, SAA formed the Public Education Committee in 1990 to address issues of public awareness and education. In 1995, the committee published Archaeology in the Classroom: Guidelines for Evaluation of Archaeology Education Materials. The guidelines presented here have developed from three key sections of that publication:

Given former unethical practices in the discipline, misrepresentation in the media, and long-time stereotypes about people of the past, members of the public often have inaccurate ideas about what archaeologists do and the populations they study.

Dinosaurs died out around 65 million years ago. Fully modern humans (Homo sapiens sapiens) have existed for about 100,000 years, and they have occupied the Americas for approximately 12,000 years. These first inhabitants hunted "megafauna" (big animals) such as mammoths and mastodons, that are now extinct, other animals, and gathered plants.

Prior to European contact, the Americas were inhabited by hundreds of sophisticated cultural groups with distinct and mutually unintelligible languages. Their houses, tools, foods, and other aspects of life differed among these populations based on historical events as well as how these people decided to live, hunt, gather, fish, and use the environment.

Archaeologists spend all of their time digging

Archaeology is more than a dig, or excavation. Archaeologists actually spend a relatively small amount of their time excavating, compared to the time spent in the laboratory, analyzing and interpreting their results, and preparing written reports about the project. Moreover, some professional archaeologists are involved in the management and protection of cultural resources rather than research.

The study of human remains from an archaeological site can provide important details about the diet and health of an individual and even a population. Such excavations are delicate and time consuming, as are the conservation and reburial or curation of the remains after recovery. For these reasons, as well as respect for sensitivities regarding deceased ancestors, archaeologists think carefully before unearthing a burial. In addition, federal laws protect the graves of Native Americans.

Archaeologists get to keep any artifacts that they find

Professional archaeologists do not keep, buy, sell, or trade any artifacts. They believe that objects recovered from a site should be kept together as a collection to be available for future research or education. By law, artifacts recovered from federal or state lands belong to the public and must be maintained on behalf of the public. The importance of artifacts is not their supposed monetary value, rather the information they provide for learning about past societies.

It's okay to pick up artifacts because if you don't, someone else will. Besides, the site won't last long anyway

Removing artifacts without using scientific methods destroys evidence and much of the significant information archaeologists can recover with that artifact. This is what pot hunters and treasure salvors do. Over time, many archaeological sites reach a state of equilibrium with their surrounding environment. They do not have to be excavated and actually survive best if left untouched. In addition, federal and state laws prohibit the removal of artifacts from public lands without a permit.

Theory and practice in archaeology are based in part on concepts about culture and the best ways to study past human behavior. For educators, this information can be valuable for presenting an archaeological perspective, that is, the way archaeologists think. Incorporating the following ideas into teaching strategies or resource materials will provide a foundation for students to comprehend archaeological principles.

Cultural systems are the focus of anthropological study

Awareness of the past is a fundamental element of archaeological study

Archaeology is the scientific study of cultures, based on their material remains

Humans affect and are affected by cultural resources

Stewardship of archaeological resources saves the past for the future

Elements of Archaeological Method and Theory

As both a process and a source of knowledge about the past, archaeology has a wide range of information to convey more than can be included in one mini-course for youths, a single training manual, or a single class in college. Despite these limitations, an essential level of conceptual, methodological, and technical details about field archaeology should be included in teaching resources. The list below outlines these basic elements.